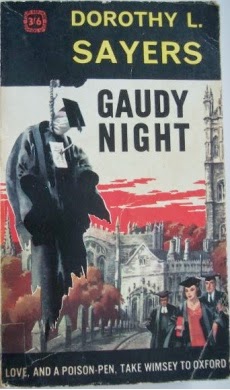 Harriet Vane returns to her old college at Oxford for a kind of class reunion (known as a gaudy night, hence the title). She witnesses the start of a strange series of events, which at first seem relatively trivial if a little disturbing. Some threatening letters, and an obscene drawing. When these minor irritations begin to escalate into a full-scale war of nerves against the college Harriet is called back to Oxford to undertake an informal and very discreet investigation (her previous dealings with the celebrated amateur detective Lord Peter Wimsey being regarded as qualifying her for this role).

Harriet finds herself increasingly drawn into the drama, and also into the academic life, a life she had abandoned some years earlier. Making little progress, she somewhat reluctantly decides to call on Lord Peter for assistance.

Oxford has provided the background to many detective stories, and it’s a great setting for a crime novel. What interesting about Gaudy Night is that Sayers doesn’t just use it as background - the human and professional dramas afflicting the women of Shrewsbury College are the real meat of the book. You could argue that the detective story in this case is merely the background detail! Sayers is attempting something quite ambitious for 1936 - this is a detective story, a love story, and a serious analysis of the problems facing women who choose to pursue careers. It’s very definitely a feminist novel.

Although Lord Peter Wimsey certainly figures in the book the central character is very much Harriet Vane. Like Sayers, Harriet is a Oxford graduate and a writer of detective fiction who has led a somewhat scandalous personal life (although Sayers managed to avoid public scandal). She was undoubtedly using this character to work through some personal issues. She also uses both Harriet (a fictional writer of detective stories) and Lord Peter (a fictional detective) to playfully send up the crime fiction genre.

This raises another problem. Harriet Vane is both an unnecessary character and an irritating one. Her presence in the later Sayers mysteries makes them reminiscent of fan fiction, with Vane as a particularly unfortunate example of a Mary Sue character.

While Sayers may have believed she was striking out in a bold new direction with this novel the truth is that it was a dead end. Gaudy Night was published in 1935. Sayers would write one more Wimsey novel before abandoning crime fiction.

Gaudy Night is interesting as an experiment. It’s the sort of book that academics get very excited by, but lovers of the detective story can be excused for giving it a miss.