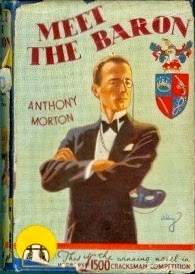 In the mid-1930s a British publisher offered a substantial prize to any author who could produce a fictional hero of the gentleman-thief variety who would be a worthy successor to the famous Raffles. The prize was won by John Creasey, with a book called Meet the Baron which appeared in 1937. This marked the beginning of the career of The Baron who would go on to figure in several dozen novels and would become one of Creasey’s most popular heroes. The Baron novels were originally published under the name Anthony Morton, one of Creasey’s many pseudonyms.

Englishman John Creasey (1908-1973) was possibly the most prolific writer of all time, publishing at least 562 novels. The most surprising thing about this is that so many of his books are extremely good.

Meet the Baron introduces us to John Mannering. Mannering is a well-educated man about town in his late 30s and is generally assumed to be extremely rich. In fact he has never been more than mildly well off and thanks to an extravagant lifestyle his financial position has become a cause for concern. Things come to a head when he falls in love with a young lady and proposes to her. When she discovers that he isn’t fabulously rich she turns him down. Mannering is rather shaken by this. On the one hand he is grateful that he discovered the lady’s true nature in time. Marriage to a woman who is now revealed as shallow and selfish would certainly have been a disaster. On the other hand Mannering is not only left wiser but more cynical on the subject of human nature, he is also led to adopt an increasingly reckless lifestyle. His limited financial resources are running out rather quickly.

One option of course would be to live a less elegant and extravagant lifestyle. This is such an absurd idea that he refuses to give it serious consideration. Another option would be to find a job, an even less appealing idea and in any case given the extravagance of his lifestyle it is unlikely that he would be able to find employment that would be sufficiently remunerative to meet his needs. That leaves only one serious option. John Mannering will have to become a thief.

The more he considers this idea the more he likes it. It is likely to be a good deal more interesting than most professions and it involves a very real element of danger. Mannering has always been susceptible to the glamour of taking risks and this tendency has become much stronger since his romantic disappointment. He knows very little about burglary but presumably it is a skill that an intelligent man should be able to pick up fairly quickly.

In fact, as he soon discovers, burglary is by no means as easy as he had imagined. The burglaries themselves present all sorts of unexpected dangers but other aspects of the profession present even greater risks to the inexperienced. It is necessary to find a reliable  and trustworthy fence, by no means an easy thing to do when you lack a network of criminal acquaintances.

Despite the risks Mannering finds that burglary offers him an exhilaration that even gambling had not previously offered him. He soon becomes fairly successful and gains a certain amount of notoriety as The Baron.

Things get slightly complicated when he falls in love again. Lorna is somewhat unconventional but even an unconventional young woman is likely to be dubious about the prospects of marrying a thief. For a daughter of a lord to marry a professional burglar is not quite the done thing.

Mannering has another problem. Inspector Bristow of Scotland Yard is determined to bring The Baron to justice and he’s a competent and determined policeman.

Meet the Baron offers plenty of thrills as The Baron manages to keep just one step ahead of Inspector Bristow while pulling off some very daring robberies. The book however has more to offer than mere thrills. John Creasey had a gift for creating intriguing and complex characters with potential for future development and John Mannering is no exception. Mannering’s psychological motivations are explored in surprising depth. He is brave and resourceful and despite his criminal activities he has a moral code of sorts. He also has a definite streak of self-destructiveness, or at the very least a reckless disregard for his own safety. Creasey gives us a vivid portrait of a man addicted to risk-taking for its own sake.

You might think that a writer who once wrote 37 novels in a single year would be rather slapdash but in fact Creasey was a disciplined and competent writer and a reasonably polished one, certainly more polished than the average practitioner of pulp fiction. His attention to characterisation means that his thrillers offer more than just thrills.

Meet the Baron is a worthy introduction to one of the most enduring fictional heroes of the 20th century. Highly recommended.
Posted by dfordoom at 12:40 AM