H. P. Lovecraft’s At the Mountains of Madness 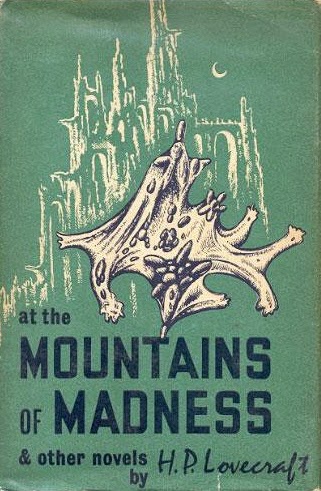 At the Mountains of Madness was one of H. P. Lovecraft’s few long stories. Some regard it as a novella while others consider it a short novel. Structurally it’s probably best considered a longish novella. Either way it’s the most ambitious entry in his Cthulhu Mythos cycle.

It was written in 1931 but rejected by Weird Tales as being too long. It was finally published in three parts in Astounding Stories in 1936.

The Antarctic setting is evidence of the influence of Poe’s only novel, The Narrative of Arthur Gordon Pym of Nantucket, written nearly a century earlier. Poe’s 1838 novel is mentioned several times and At the Mountains of Madness is thus an attempt to link Lovecraft’s own Cthulhu Mythos to Poe’s work. The Antarctic setting also appealed to Lovecraft because of his own horror of the cold.

Lovecraft’s novella tells the story of the extraordinary and horrifying discoveries made by a Miskatonic University expedition in the late 1920s. The narrator, geologist William Dyer (one of the leaders of the expedition), has decided to reveal the full extent of the discoveries in order to argue that  the proposed Starkweather-Moore Expedition must not take place. There are some places that should not be explored and some secrets that should remain forever secret.

The structure of the book is interesting. The narrator first tells us what might be termed the official version of the ill-fated expedition, the survivors having considered that this version contained as much information as you could safely be made public at the time. The narrator then tells us the real story. He is reluctant to do so but believes this is the only way to prevent the Starkweather-Moore Expedition from setting out.

The expedition had been lavishly funded, to the extent of having two ships and four large Dornier aircraft at its disposal. One of the four leaders of the expedition, the biologist Lake,  had set off on a side expedition with several of the aircraft. Lake had sent a series of radio messages announcing discoveries that would revolutionise our understanding of cosmology, evolution and human history. Lake’s messages became more and more excited and then suddenly ceased. Fearing disaster Dyer had set off with several companions in one of the remaining aircraft. Upon reaching Lake’s camp they found grisly evidences of disaster, and other evidence that confirmed Lake’s extraordinary discoveries. The decision was made to attribute the calamity to madness induced by a storm of unbelievable intensity. 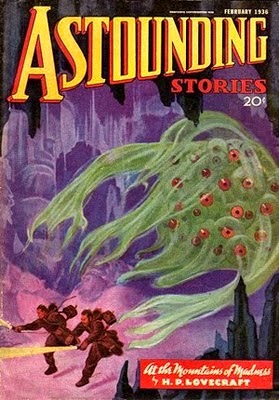 This is essentially the official version that was released to the public at the time. What had not been publicly revealed was that before returning to their base camp Dyer and graduate student Danforth had set off in a specially lightened Dornier to cross the gigantic mountain chain that Lake had discovered, a mountain chain that dwarfed the Himalayas. Hints dropped by Lake and certain strange and inexplicably regular features of these mountains made such a crossing seem essential.

After crossing the mountain range Dyer and Danforth discovered the remains of a vast city. Explorations of the ruins revealed a series of relief carvings that told the history of the builders of that city. That history was enough to drive Danforth permanently mad and to persuade Dyer that Antarctic exploration must never again be attempted.

It is the history of those who built the city, the Old Ones, that forms the core of the book. In this history Lovecraft develops the myth of the Old Ones in great detail and touches on the origins of Cthulhu and of other fabulous and terrifying entities such as the Shoggoth and the Mi-Go. It also explains much that had hitherto been incomprehensible in the Necronomicon and in various obscure cults, folklores and other esoteric writings. It is Lovecraft’s fullest and most ambitious treatment of the mythology he had created.

The book’s structure is rather daring. With so much space devoted to the explication of the story of the Old Ones there was a real danger that the book, being somewhat lacking in action, would be excessively slowly paced. Lovecraft avoids the danger in two ways. Firstly, his account of the Old Ones is such an imaginative tour-de-force that the reader is unlikely to be wearied by it. Secondly, he uses his favoured technique of revealing the true dimension of his horrors as slowly as possible by throwing out hints whilst concealing their full implications. At first we find Dyer’s attitude puzzling. The expedition’s discoveries are disturbing and provocative but we feel that any scientist worth his salt would be clamouring  to have them more fully investigated. Dyer does have a very good for his attitude but Lovecraft builds the tension by keeping us in the dark for as long as possible as to what it really was that sent poor Danfoth mad.

Lovecraft gives his tale added verisimilitude by adding references to real Antarctic explorers, including Australia’s Sir Douglas Mawson who really was, as stated in Lovecraft’s novel,  leading an important expedition at the same time as the fictional Miskatonic University expedition. Lovecraft had obviously done his homework on Antarctic exploration.

This book is also in some respects a lost world tale. Lovecraft was well-read in fantastic fiction and there is a certain H. Rider Haggard influence at work here, Haggard being the acknowledged master of the lost world tale.

At the Mountains of Madness is an essential part of the Cthulhu Mythos and it’s a masterful tale of imagination and terror. Very highly recommended.
Posted by dfordoom at 6:17 AM