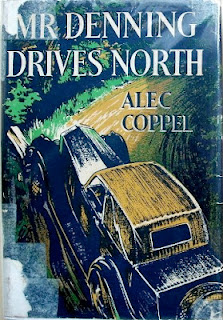 Mr Denning Drives North is an unjustly forgotten classic of British crime fiction. Written by Alec Coppel in 1951, it can be seen as a variation on the inverted detective story.  We know right from the start who the murderer is. What we don’t know is what his fate will be.

None of what I am about to tell you constitutes a spoiler. This is all just the set-up and it all happens very early in the book. The suspense will come later, and there will be plenty of it, and many many ingenious plot twists.

Tom Denning is a very successful businessman. He is an aircraft designer who owns his own aircraft factory. He is happily married and has a daughter with whom he gets on well. Tom has everything a man could want. So why does he deliberately try to crash his plane into the ground?

The answer to that is that he is haunted by a murder he committed. Not that he feels any regret for the murder itself. He believes the man he killed deserved to die. And it was not even murder, not really. He didn’t mean to actually kill the man, although he’s glad that he did. What haunts Tom Denning is the wait for the knock on the door from the police. What haunts him even more is that the body has not been found, even though he went to elaborate lengths to ensure that it would be found. He put great care into staging a mock accident, believing he had been careful enough to make it look convincing. But what Tom Denning was relying on was that the body would quickly be found, the coroner would bring in a verdict of accidental death, and he could then get on with his life.

It all seemed so easy. But every day he scans the newspapers, and there is no mention of any body being found. Finally he can’t stand it any longer. He returns to the scene of the “accident” but the body has gone. But if the body has gone, how to explain the fact that nobody has discovered it?

Weeks go by, and nothing happens, while Tom goes slowly mad. Of course eventually something does happen but the subsequent course of events is unexpected as Coppel spins a series of clever plot twists that keeps the tension building right up to the very last page. Tom will try to unravel the mystery, so we have an amateur detective who is in fact trying to find the solution to a murder he himself committed. As he tries to solve the puzzle his nightmare just keeps finding new ways to torture him.

There is plenty of irony in this tale. Tom is in fact guilty of nothing more than manslaughter and given his previously unblemished character and various extenuating circumstances the worst he could have expected was a short prison term. But Tom had to act to protect his daughter, and in trying to make the killing look like an accident he has only succeeded in making it look like cold-blooded premeditated murder. Now if he is caught he will hang. Tom is caught in a trap of his own devising. And not knowing if he will eventually be caught  or not adds an exquisite touch of torture to the whole situation.

The plotting is masterful but this novel has more than clever plotting going for it. We have a murderer who is the hero of the book and he’s a sympathetic character. We can’t help hoping he gets away with it, but we won’t know until the final page whether he does or not. It’s a fascinating character study of a man under extreme stress. Coppel’s style is pleasing and this really is a delightfully wicked and clever crime story.

Coppel adapted his own novel for a 1952 film version starring Sir John Mills, and the movie is well worth tracking down as well. The novel and the movie are sufficiently different to make both well worth the effort of finding them.
Posted by dfordoom at 5:09 PM