The Final Count, by Sapper 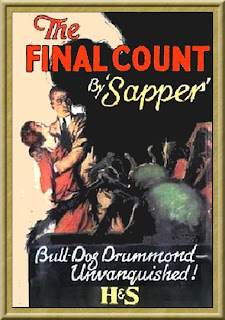 The Final Count, published in 1926, was the fourth of the ten Bulldog Drummond novels written by H. C. McNeile under the name Sapper during the 1920s and 1930s (although McNeile’s friend Gerard Fairlie would write seven more Bulldog Drummond books after McNeile’s death).

The Final Count also marks the fourth occasion on which Drummond would match wits with the sinister criminal mastermind Carl Peterson.

The novel is narrated by a man named Stockton, whose friend Robin Gaunt is working on some hush-hush project for the British War Office. Gaunt had been working on a secret super-weapon during the Great War and now he believes he has perfected it. He believes it to be a weapon so terrible that it will make any future war impossible - any nation that possesses the secret of this weapon could impose peace on the entire world and no nation would dare to oppose them.

This is of course a slightly eccentric plan, but Gaunt is no madman. Not yet, anyway. Then Stockton receives a strange telephone call from Gaunt. When he hurries round to Gaunt’s flat he  is greeted by a strange scene - there is much blood on the floor, there are the dead bodies of a dog and a guinea pig, and no sign of Robin Gaunt. And in the flat next door a man lies dead.

When strange and sinister events are afoot, events that leave the police baffled, it is never very long before Captain Hugh Drummond manages to get involved. He has an infallible nose for a mystery and for an adventure, and sure enough he is soon in the thick of things. And this is a very great mystery indeed, and even stranger events will soon unfold.

Clearly someone had discovered the existence of Gaunt’s super-weapon and that someone must now be assumed to be in possession of the secret, but what possible connection can this have with the disappearance of a private luxury yacht, the building of a new commercial dirigible and Cornish tin mines? Drummond doesn’t know yet, but he intends to find out. His determination is strengthened when he begins to suspect that his old foe Carl Peterson may be involved. Carl Peterson is Drummond’s Professor Moriarty, an arch-criminal so clever and so vicious that if the public knew of his existence no-one would ever sleep soundly in their beds.

This follows Sapper’s standard formula which by this time he had down to a fine art. There will be high adventure and Drummond will have to make use of both his uncanny instincts when it comes to unusual and spectacular crimes, his wartime experiences that made him such a great leader of men, and his pugnacious and indomitable spirit. And of course his fists.

The Bulldog Drummond novels might not be great literature but they are great fun. Like Sax Rohmer, McNeile had a gift for story-telling and for coming up with outrageous master plans by which his chief villain could not only pull off audacious crimes, but crimes on such a scale that the very existence of European civilisation would be threatened.

Whether you actually like Drummond as a character depends on your tastes. Some modern readers may consider him too patriotic and too faultlessly courageous, qualities that are now out of fashion. But Drummond is a fascinating character as well. He gives the impression of being almost a buffoon but beneath the brash exterior there is a razor sharp mind.

This is an old-fashioned ripping yarn, and thoroughly enjoyable it is too. The Bulldog Drummond novels do need to be read in sequence though, so read the first three before reading this one. Drummond’s four encounters with Carl Peterson have been collected in a splendid and ridiculously cheap omnibus edition by Wordsworth, a volume I highly recommend to all lovers of spy/adventure stories featuring diabolical criminal masterminds.
Posted by dfordoom at 5:45 AM