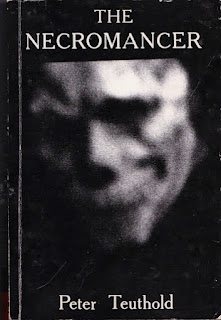 In her satire of the gothic novel, Northanger Abbey, one of Jane Austen’s characters recommends seven “horrid novels” to her friend. For many years it was assumed that Austen had made up the titles but in fact Austen knew her gothic literature (one suspects she was rather a fan) and all seven are real books. First published in 1794, Peter Teuthold’s The Necromancer; or, The Tale of the Black Forest was one of these seven books.

Teuthold claimed the book to be a translation from the German of Lawrence Flammenberg (real name Carl Friedrich Kahlert). It had been assumed that Teuthold made this claim to give the book a more German flavour but apparently it really was a translation.

There has been a certain amount of interest in these “horrid novels” and all are currently in print although information on the authors is hard to come by.

To attempt to describe the plot in any detail would only cause more confusion. You just have to go with it.

The central figure in all the tales is Volkert the Necromancer although this is not immediately apparent since he appears in various disguises and under several false names. After a while you learn to assume that any elderly man with a mysterious or sinister air to him is probably Volkert, and you’re usually correct.

Volkert is a sergeant in the Austrian Army who has dabbled in the occult for many years. He has found it to be a profitable sideline but a dangerous one as he has found himself more and more deeply enmeshed in crime as a result. Volkert is both a necromancer and a con-man. While several of the narrators believe that Volkert really possesses supernatural powers it is clear that most if not all of the supernatural events in which he is involved are elaborate frauds.

Of course there has to be a moral message, and that message is that a life devoted to such swindles will be a life of increasing moral degradation.

Jane Austen’s heroines would have been well pleased with this novel. There are ruined castles, dungeons, hidden passages, haunted inns, executions, duels and numerous ghostly manifestations. There are thrills and chills. There’s gothic atmosphere laid on as thickly as anyone could possibly desire. Necromancers were seemingly much in demand in 18th century Germany, for purposes both honest and dishonest. Usually the latter.

This is certainly not one of the classics of the genre but it has its own bizarre charm. Worth a read. It's also worth seeking out another of Austen's horrid novels, The Castle of Wolfenbach.
Posted by dfordoom at 9:03 AM