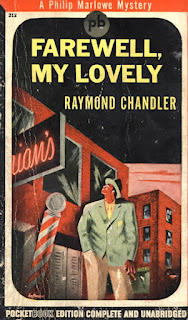 Revisting the book I liked it even more, which I think is the mark of a great crime novel.

I also quickly became fond of Philip Marlowe, and was pleasantly surprised to find that he wasn’t a mere tough guy.  In fact he’s a delightful mixture of tough guy and sensitive guy, of cynic and idealist.  And Chandler makes that combination of qualities believable.

The plot was fiendishly complex, but I’ve now come to the conclusion that it’s best not to get overly worried about all the twists and turns of Chandler’s plots.  It’s the style that matters, and the character of Marlowe.

Mind you, this one has some great supporting characters as well, like Velma and Moose Molloy and in fact even the minor characters are fairly memorable. Chandler’s great strengths were his characterisation and his dialogue, both demonstrated to great advantage in this book.

This was Chandler’s second  Philip Marlowe novel, published in 1940, a year after The Big Sleep. It helped to consolidate Chandler’s reputation as the best of the up-and-coming hardboiled crime writers. Farewell, My Lovely remains, deservedly, one of his most admired novels.

It’s been filmed three times and at least two of the film versions (from 1944 and 1975) are classics.

It’s crime writing of a very different type compared to the English school of detective fiction – Chandler is at least as much concerned with social commentary as in setting the reader a puzzle to solve.  Farewell, My Lovely is still one of my favourite crime novels.
Posted by dfordoom at 6:48 AM