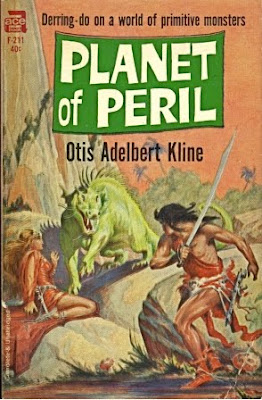 Otis Adelbert Kline’s 1929 novel Planet of Peril is a sword-and-planet adventure very much in the style of Edgar Rice Burroughs.

In fact so much so that the two authors were alleged to have had something of a literary feud going over this issue. The reality seems to be that although Kline’s work was essentially Burroughs pastiche Burroughs (very sensibly) took no notice. Burroughs was by that time so popular that he could afford to regard imitation as a tribute rather than a threat.

As a Burroughs pastiche Planet of Peril is pretty reasonable. If you enjoy Burroughs’ work there’s no reason you won’t enjoy Kline’s. Kline could not match the extraordinary world-building skills of Burroughs but he gave it his best shot.

Robert Grandon is bored, in the way only a 24-year-old can be bored. He craves a life of adventure and he has done his best to pursue that craving but ennui has still caught up with him. So when he receives a very mysterious invitation he has no hesitation in accepting it.

Doctor Morgan has a curious proposition for him. He has already demonstrated his telepathic abilities by the manner in which the invitation was extended, but telepathic skills are only a part of the strange tale he spins. It appears that he is in telepathic communication with certain inhabitants of the planets Venus and Mars. Even stranger, these are inhabitants of those planets who lived aeons ago. And even stranger still, he has discovered that it is possible to swap minds with these people. He offers Grandon the opportunity to take over the body of a long-dead Venusian while the Venusian takes over his body.

Grandon accepts the offer, and finds himself on the planet Venus in the distant past in the body of a Venusian prince who has been enslaved by a beautiful but formidable and cruel princess named Vernia. The inhabitants call the planet Zarovia.

Grandon escapes and encounters some of the strange creatures of Zarovia, such as the deadly insectoid sabits. He becomes involved in plots and counter-plots and in the conflicts between the constantly warring kingdoms of Zarovia. He also discovers love, in the unlikely form of Vernia. She turns out not to be so evil after all.

The battles involve airships and an odd mix of primitive and advanced weaponry, in the typical style of sword-and-planet adventures.

There’s the usual mix of intrigue, romance and action. It might not be quite up to the standards of the best examples of the genre but it’s entertaining enough stuff and worth a look.
Posted by dfordoom at 6:56 PM