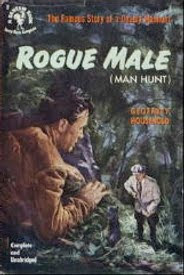 Geoffrey Household’s 1939 thriller novel Rogue Male deals with a plot to kill HItler. Only it’s not actually a plot, it’s more of a solo mission that at first seems to have no real motive.

Hitler is never mentioned by name and the attempted assassination takes place in an unnamed central European nation but it’s perfectly clear who the target is. He’s a dictator who is seen as a potential threat to Britain and his country shares a border with Poland.

More interesting than the subject matter is the unusual structure of the book. Instead of leading up gradually to the assassination, the attempt takes place on the very first page. So I’m not giving away any spoilers by revealing that the attempt fails. The would-be assassin (who is also the narrator) is captured and tortured but refuses to say anything of his motives and insists he acted alone. Since the interrogation has failed to produce anything of value the decision is made to dispose of the assassin. Against the odds and suffering from horrific injuries he survives, and sets out on a nightmarish return journey to England.

So who is this would-be dictator-killer? He is an English big-game hunter. He tells us his story in three sections, each written at different stages of what will turn out to be quite an adventure, and quite an ordeal.

While the story opens with the attempt on the dictator’s life there are no extended flashbacks, as you might expect. His story starts with his assassination attempt, although he will certainly reflect upon his actions leading up to that event. Initially he tells us he has no real idea why he did what he did, other than the fact that having had a life-long passion for hunting he thought it would be a challenge to stalk the most dangerous prey of all (shades of the Most Dangerous Game here). He claims that he had no intention of actually pulling the trigger - it was merely a kind of game with himself.

He is a wealthy man and quite well-known, although he never tells us who he really is. He fears that his actions may bring embarrassment and even disgrace to both himself and his country. For this reason, and also because he fears that the dictator’s secret police may be hunting him (by this time they will have discovered that he did not die as they expected him to). So he determines to go into hiding. Being a solitary man by nature, and given that he has spent much of his life in various wild places, he chooses to hide out not in the anonymity of a city but in the countryside.

As his story progresses he faces the slowly dawning realisation of the true reasons that drove him to stalk the dictator, and he faces also the realisation of what the consequences of that self-knowledge must entail.

He also comes to see that he cannot remain the hunted forever.

This is clearly not a mere potboiler nor is it a conventional thriller novel. It obviously has some affinities to the sorts of spy stories that Eric Ambler and Graham Greene were starting to write in the 1930s, with its amateur assassin hero and its emphasis on psychology. It’s also representative of the more literary kind of thriller that was emerging at that time.

That’s not to say that it doesn’t work very well as a suspense thriller. It’s a taut and very tense story and it’s gripping and highly entertaining in its own very individualistic way.

Recommended.
Posted by dfordoom at 3:31 AM