The Extraordinary Adventures of a Russian Scientist Across the Solar System 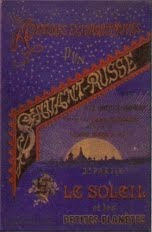 The Extraordinary Adventures of a Russian Scientist Across the Solar System was published in four volumes between 1888 and 1896. As translator Brian Stableford points out in his introduction it illustrates many of the problems faced by 19th century science fiction writers, and some of these problems have yet to be resolved.

The book was written by George le Faure, a writer of popular fiction, and Henri de Graffigny, an engineer who devoted much of his time to the popularisation of science. The two authors had divergent aims, which is part of the book’s problem. They also seem to have changed their minds halfway through as to the direction the story would take.

Despite some major flaws this remains one of the most ambitious of all early science fiction novels and in fact nothing with anything approaching its epic sweep would be produced for at least another half-century. At well over 900 pages in the two-volume Black Coat Press edition it’s also unusually long for a 19th century scientific romance.

The story starts in Russia where the great astronomer Mikhail Ossipoff has invented a prodigiously powerful new explosive. Why would an astronomer be working in explosives? The answer is simple. He intends to build a gigantic cannon to launch a manned projectile into space with the aim of reaching the Moon. Ossipoff has a deadly rival - Fedor Sharp, the chairman of the St Petersburg Academy of Sciences. Sharp plans to denounce Ossipoff to the secret police and steal his invention.

Fortunately Ossipoff has some allies. There’s the young French diplomat Gontran de Flammermont who is hoping to marry Ossipoff’s daughter Selene (named of course after earth’s satellite). Ossipoff is happy to agree to the match because he has somehow convinced himself that Gontran is a scientist as well, the son of a great French astronomer. While de Flammermont is a brave and intelligent young man his ignorance of astronomy is complete. Luckily Gontran has a friend who is a real scientist, the young engineer and inventor Alcide Fricoulet. Fricoulet agrees to help Gontran to keep the old man convinced that he really is a scientist. Gontran and Fricoulet are persuaded to accompany Mikhail Ossipoff on his journey to the Moon.

The first priority though is to rescue Professor Ossipoff from Siberia. Fricoulet’s latest invention, which he calls an aeroplane, will come in handy. But then there’s another problem - our would-be interplanetary adventurers no longer have access to the resources to build their space gun. Fedor Sharp has taken over that project and intends to launch his own mission to the Moon. How is Ossipoff to launch his space shell without a space cannon? The answer to this is obvious. They will need to find a volcano. A volcano is after all more or less a cannon, isn’t it?

Selene insists that she will not stay behind while her father and her hisband-to-be undertake such a dangerous exploit so she becomes the fourth member of the crew. The fifth crew member is an eccentric American millionaire who has been cheated by Fedor Sharp.

Not only do they reach the Moon, that is only the start of their adventures. With the help of the inhabitants of the Moon they travel to Venus, and thence to Mercury. A chance encounter with a comet and with the asteroid belt offers them the opportunity to visit Mars and the outer planets. And even that is not the end - their next stop is Alpha Centauri!

Stableford sees the book as a kind of hybrid, combining an action adventure tale with a kind of very early version of hard science fiction. And that’s where the problems behind, since the authors are reluctant to indulge in too much unwarranted speculation about other planets. That doesn’t stop them from getting things very wrong indeed since they were basing their ideas on the commonly accepted astronomical opinions of the 19th century. They assume that features that look like oceans on the other planets really are oceans.

They also firmly believe that all the planets are inhabited, and inhabited by creatures very similar to humans, which leads them to look for ingenious explanations as to how human-like creatures could survive on such obviously hostile worlds as Mercury and Jupiter.

As an adventure story it’s highly enjoyable, although perhaps a little over-long. There’s more fun to be had from the truly bizarre methods of interplanetary travel that the authors have devised (methods that are also insanely unscientific and frighteningly impractical).

Like all the early French science fiction stories Stableford has translated The Extraordinary Adventures of a Russian Scientist Across the Solar System is entertaining despite its faults and gives some fascinating insights into the evolution of the genre.
Posted by dfordoom at 7:29 PM