A Touch of Death, by Charles Williams 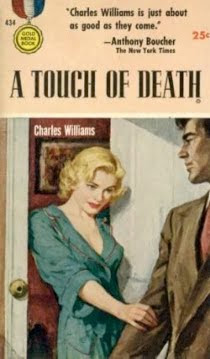 Mention hardboiled crime fiction and most people with think of Dashiell Hammett, Raymond Chandler and James M. Cain and their classic noir novels of the 1920s to 1940s. But the hardboiled style was still going strong in the 50s and even into the 60s in the hands of some very gifted practitioners. One of whom was Charles Williams (1909-1975).

One of his best-known books started life as a novella known as And Share Alike which in 1954 was expanded into a novel as A Touch of Death (also published as Mix Yourself a Redhead).

It all starts innocently enough. Lee Scarborough had been a college football star until a knee injury ended his career. It was the beginning of a downhill slide. After a stint as an unsuccessful real estate agent he is now an unsuccessful car salesman. Chasing up a lead for a possible sale leads him to the back garden of an apartment block and an attractive half-naked brunette. The brunette isn’t interested in buying a car but she does a proposal for him. It’s easy money. Nothing could go wrong.

All he has to do is to search an empty house for some stolen money. The money was stolen from a bank by a banker. The banker has disappeared. The half-naked brunette tells Lee that the banker’s wife killed him and she has the money hidden in her house. She’s out of town, the house is empty, all Lee has to do is search until he finds it. The banker’s wife can’t go to the police so it’s a foolproof plan.

Lee isn’t completely dumb and he has his suspicions but he wants that money badly.

This simple plan soon becomes very complicated indeed. Lee gets mixed up with the banker’s wife and with a couple of deadly blondes. He finds himself on the run, and he learns how to mix himself a redhead.

It’s a classic criminal couple on the run story except they’re not exactly a couple and there are some very nasty twists in store.

A Touch of Death boasts one of the most memorable femmes fatales in crime fiction. There’s plenty of terrific hardboiled dialogue, there’s an ample supply of the cynicism the genre requires, there’s action and there’s as much suppressed sexuality threatening to blow the lid off things as you could possibly want.

It scores equally strongly on plotting and atmosphere and it has fascinatingly perverse characters. In fact it has everything you could wish for in a crime novel and Williams combines the ingredients with a master’s touch. Highly recommended. And it’s in print, from Hard Case Crime.
Posted by dfordoom at 4:38 AM